India vs England: A Look Back at The Highest Successful Run Chases in Test History

July 17-21, 2014, Lord’s: England were set a target of 319. Ishant Sharma ran through the top and middle order of the home team and returned with a career-best 7-74 in 23 overs. England were dismissed for 223 handing India a famous 95-run victory. The performance changed Ishant Sharma and a new bowler was born. He had begun the year with heaps of wickets in Auckland and Wellington but Lord’s 2014 marked a complete transformation.

Ishant had only given glimpses of his fast bowling prowess till the end of 2013. There were some fine performances – 10-108 against the West Indies in Bridgetown in 2011 which remains the only 10 wicket haul of his career and 7-58 in a series-defining performance against New Zealand in Nagpur his two best in this time-frame. But Ishant’s overall numbers were much below par for an international level fast bowler during this period. Since the 1st of January, 2014, Ishant has picked 151 wickets in just 45 matches (84 innings) at a bowling average of 25.9 and strike rate of 52.7. That is a dramatic improvement of almost 13 runs less conceded per dismissal and 17 balls fewer per wicket! 8 of his 11 career fifers have come in this period.

Amongst the 20 fast bowlers who have bagged a minimum of 100 wickets in this time-frame, Ishant’s average ranks him at number 8. Only Anderson, Cummins, Rabada, Wagner, Morkel, Broad and Hazlewood fare better. He is ahead of other Indian quicks – Mohammed Shami and Umesh Yadav in this period. Ishant also has a better bowling average in this time-frame than Philander, Starc and Southee amongst others.

The period post 2014 saw Ishant produce some of the best performances of his career. Apart from Lord’s 2014, Ishant gave another fine showing in England when his 5-51 was instrumental in routing the home team for 180 in the second innings of the 2018 series opener in Birmingham. He was also India’s leading wicket-taker in this series.

Although Cheteshwar Pujara got the Man of the Match, it was Ishant’s spell of 5-54 which gave India a match-winning 100-plus lead in the first innings of the series decider at Colombo (SSC) in 2015. He had returned with 6-51 routing New Zealand for 192 in the first innings at the Basin Reserve in 2014.

Post 2014, Ishant has aggregated 60 wickets in just 13 Tests in South Africa, England and New Zealand (SEN). His average (23.68) and strike rate (46.4) place him at number 7 and 6 amongst the fast bowlers with more than 20 wickets in a minimum of 10 matches in these countries.

His average in SEN in this time-frame is better than Philander, Morkel, Southee, Boult, Woakes, Hazlewood and Bumrah – which is an incredible achievement as most of these bowlers are from one of the three countries. His average and strike rate in this period, both, are also the best for an Indian fast bowler (min. 20 wickets) ahead of Bumrah, Bhuvneshwar Kumar and Shami. 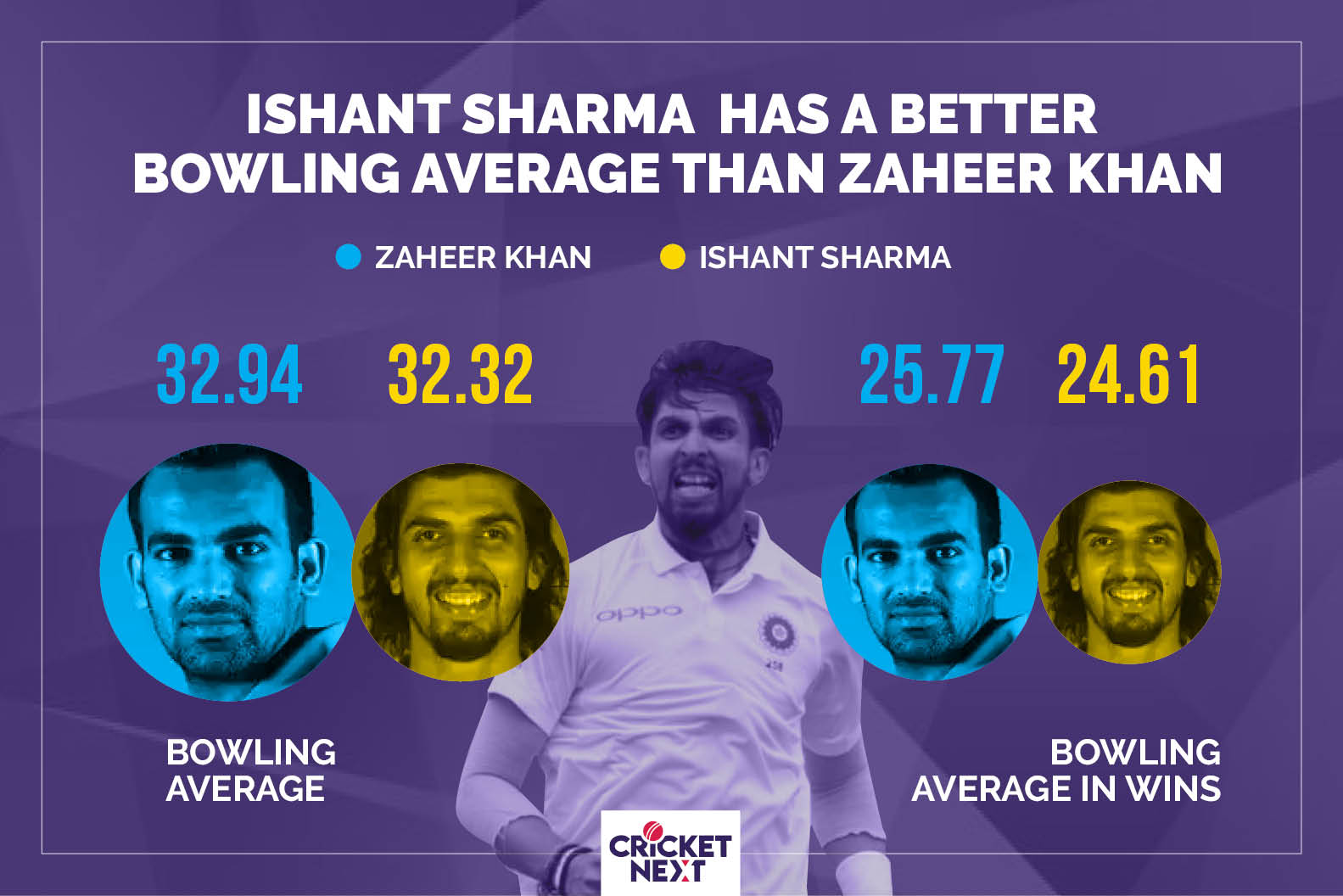 Ishant Sharma is often not given the same respect as other great Indian fast bowlers. Zaheer Khan is regarded as an all-time fast bowling great from India. Khan had a bowling average of 32.94 – Ishant is marginally better at 32.32! Interestingly, Ishant’s average in wins for India of 24.61 is also better than that of Zaheer (25.77)! Talk about personal biases.

AMONGST THE BEST IN THE WORLD SINCE 2018 Ishant has been sensational with the ball post 2018. He has bagged 74 wickets in just 19 Tests at an average of 19.39 and strike rate of 42.8 including 4 fifers in this time-frame. Ishant has the second-best bowling average (after Jason Holder) and the second-best bowling strike rate (after Umesh Yadav) amongst the 26 fast bowlers who have picked a minimum of 30 wickets and played at least 10 Tests in this period – this is a staggering achievement for a fast bowler who is a veteran of 90-plus Tests and not getting younger!

Ishant has left behind, both in terms of average and strike rate, greats like Cummins, Philander, Anderson, Bumrah, Broad, Southee and Rabada amongst others during this period. He has been instrumental in India’s success in Test cricket during the last three years.

Most of his critics had written Ishant off after the first half of his career. And scoffed even at the prospect of him playing Test cricket. Ishant has now represented his country in 98 Tests. Only Kapil Dev has more Test caps amongst pace bowlers for India.

More often than not fast bowlers get worn out towards the end of their career, especially when their first half has been average at best. But that was not the case with Ishant. He got better with age and experience and has completely transformed himself into a genuine match-winner for India and a world-class bowler.

Time to give Ishant Sharma his due.

Facebook
Twitter
Pinterest
WhatsApp
Previous articleIndia vs England-We Are Very Happy With Where We Are At, Says England Bowling Coach Jon Lewis
Next articleIreland Tour Of Zimbabwe Called Off Over COVID-19 Concerns