NewshillsLatest news at this moment
Home Cricket India vs England 2021: Among The Best Scorers in Asia & England's...
Cricket

India vs England 2021: Among The Best Scorers in Asia & England’s Most Prolific Scorer After 99 Tests The England captain, Joe Root will become the 15th player from England to play his 100th Test match when he takes the field against India in the series opener in Chennai on the 5th of February. Root is amongst the greatest batsmen from England in the last 50 years, a fine player of spin and a member of the Fab-4 which comprises the great Steven Smith, Virat Kohli and Kane Williamson.

Root was in great form in the recent two-match series in Sri Lanka where he was the highest scorer with 426 runs including a double hundred and another 150-plus century. He set the alarm bells ringing in India with his brilliant performance in hot and sultry spinner-friendly conditions in Galle and would be the prized wicket in the upcoming series.

We look at some numbers which have defined his Test career.

The 15th Player to Play 100 Tests for England Joe Root will become the 15th player from England to play 100 Test matches when he steps on the field in Chennai for the series opener starting 5th of February. Root has an aggregate of 8249 runs in 99 Tests at an average of 49.39 including 19 hundreds and 49 fifties. He has the highest batting average amongst the 10 highest run-getters for England in their Test history.

Root also has the highest batting average amongst the 7 English batsmen in the 8000 Test Club. These include some all time greats like Alastair Cook, Kevin Pietersen and Geoff Boycott.

A Prolific Run Scorer for England Since Debut

Root made his Test debut against India at Nagpur in 2012 and scored a fine 73 under pressure from number 6 in the first innings. England went on to draw the Test and take the series 2-1. He made a significant contribution in his maiden appearance for England – a performance which helped them seal a historic 2-1 series win in India – their first since 1984!

Root has been England’s most prolific run-scorer since Nagpur, 2012. There is a fair distance between him and the second-highest run-getter for England – Alastair Cook (5369 runs) in this period. No one comes close to his average as well. He also has the maximum aggregate in the world in this time-frame ahead of Steven Smith, Virat Kohli, David Warner and Kane Williamson who follow. 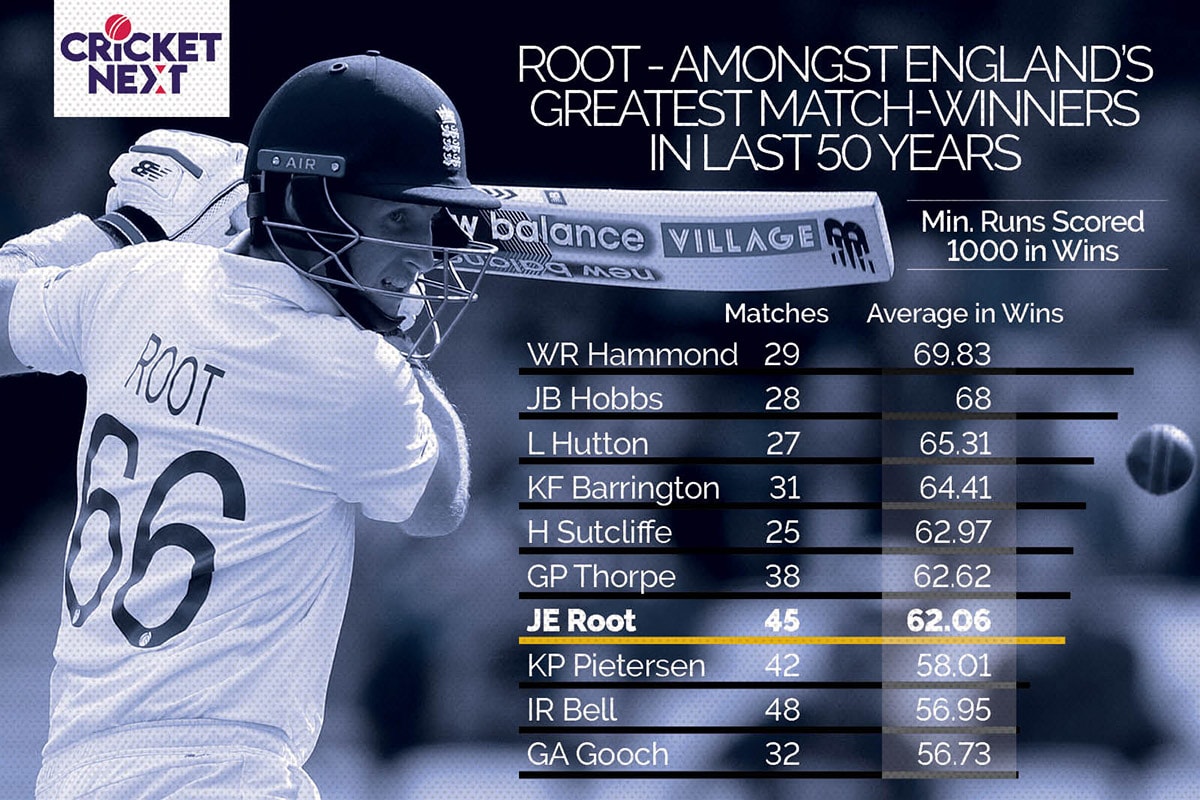 Root is also the highest run-getter for England after 99 Tests. He is followed by Pietersen (7887), Cook (7883) and Gooch (7573). This shows his appetite for getting the big runs for his country.

India vs England 2021: Virat Kohli vs James Anderson & Other Key Battles To Watch Out For

A Great Match-Winner for England

Root has the second-highest average of 62.06 in wins for England in Test cricket in the last 50 years. This is a staggering statistic as he surpasses greats like Pietersen, Gooch, Cowdrey, Cook and Boycott amongst others. This basically means that he raised his game in the matches that mattered most for his nation scoring a very high proportion of his runs in victories for England.

England have never lost a Test when Root has registered a hundred – this is another astonishing feat for the England captain. His team has won as many as 15 of the 19 matches when Root has reached triple-figures while drawing on 4 occasions.

His top 5 performances (in terms of runs scored in a series context) all came during this period. Root was the highest scorer with 518 runs in 7 innings in the 3-1 win over India at home in 2014, was again the highest run-getter in the home series against Pakistan in 2016, was England’s best batsman on their last tour of India with 491 runs, the star for England in another home-series win against South Africa in 2017 and the hero with the bat in the Ashes triumph of 2015.

The Ashes is a benchmark to measure the greatness of players from England and Australia. Root does not have an outstanding record in the prestigious series as some other batsmen from both the countries but has still returned with decent numbers. He has an aggregate of 1694 runs in 24 Ashes Tests at an average of 40.33 including 3 hundreds and 13 fifties. His standout performance came in Ashes triumph at home in 2015 where he top-scored for the hosts with 460 runs in 5 Tests including two hundreds and as many fifties.

India vs England 2021-Cheteshwar Pujara Will be Huge Wicket, No Doubt: Joe Root

Root is an excellent player of spin and his numbers in Asia testify that claim. He has scored 1624 runs in 16 matches in the continent at an average of 54.13 including 4 hundreds. It is the second-highest average (min. 1000 runs) for a batsman from England in Asia. Root has an average of 53.09 in India but has been most impressive in the hot and humid conditions of Sri Lanka where he has an aggregate of 655 runs in 5 Tests at 65.5 including 3 hundreds – two of them in the 2-0 sweep earlier this year.

Some all-time greats have travelled to the sub-continent and failed either succumbing to the spin or the conditions. For Root to have succeeded in India speaks volumes not only of his skill and ability against spin but also of his mental toughness and temperament.

Root has the second-best batting average against spin bowling (57.21) for a non-Asian batsman in Asia since 2002 – only after Jacques Kallis (59.1).

Root has often been accused of not converting his starts into hundreds. While that is true he has been terrific in piling on the fifties in Test cricket. The England captain has recorded 50-plus in an innings on 68 occasions – the most by any batsman in Test cricket after 99 Tests – an indicator of his phenomenal consistency in the format. He is followed by Sunil Gavaskar (66 fifties), Brian Lara (64) and Rahul Dravid and Sachin Tendulkar (63 each).

Root is already an all-time great. Still young and barely 30 he has the potential to break some all-time records in Test cricket and be counted right up there amongst the pantheon of the best in Test cricket history.

Disha Patani Does Her Make-up for First Time