Now that we have a better grip on the coronavirus which devastated the entire world in 2020 and are aware of the safety precautions we have to follow to avoid getting infected, people have started going out. Celebrities, too, are adjusting to the new normal stepping outside.

On Thursday, celebrated actor Aamir Khan was spotted outside in Mumbai playing cricket with some young kids. Although Aamir looked quite confident with the bat, some were not happy with him.

After the video of Aamir playing with the young boys went viral, it raised a few eyebrows, including actor Kishwer Merchantt, and they take a dig at Aamir for not wearing a mask and putting the lives of others at risk.

In the video clip, you can see Aamir trying few nice-looking shots before taking his belongings including his mask and leaving the ground. Before leaving he also stopped for a group selfie with kids and he was seen without a mask while posing for the group picture.

Reacting to the video, Kishwer Merchantt asked, “None of them wearing a mask? How? Why?” Many others raised their voice on why the superstar not following COVID protocol. 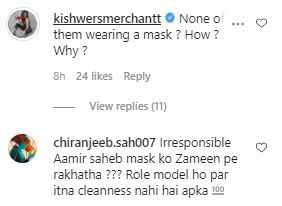 However, certain fans of Aamir quickly responded defending the actor. One user justified: “People need to breathe while playing a sport ..isnt that common sense.”

Meanwhile, on the work front, Aamir recently completed the shooting of his upcoming film ‘Laal Singh Chaddha’ that’s expected to release on Christmas this year.

IFFI 2021 Set To Begin In ‘Hybrid Mode’ Amid Pandemic

Bollywood sequels to look forward in 2021

What do you eat, Mumbai players asked me: Mohammed Azharuddeen | Cricket News